For many years, the month of April had been thriving with two festivals on the Northern coast of Brittany: Tant qu'il y aura des Mouettes(As long as there will be seagulls), a circus and music festival organised by Galapiat Cirque, and Marionnet’ic, a puppet festival organisedby Philippe Saumont and the Théâtre des Tarabates.

In 2014, both organisations decided to put together their energy and become partners by jointly supporting a circus and puppet creation. In this context, Galapiat Cirque call on an artist friend of the company, Barbara Gay, a clown and puppeteer to respond to their common desire.

Therefore, the collaboration between those organisms belonging to two different networks made it possible for the show Dédoublez-moi to materialise.
At the théâtre des Tarabates to begin with. A workshop took place with the help of about 30 volunteers who collaborated on the technical aspects of the projects. Members belonging to two networks of locally active organisations.
Then in a big top, on a circus ring, participating in Galapiat Cirque projects, for instance "chapiteau d’hiver" in Relecq Kerhuon, Brittany or Marionnet’ic.

Putting together ressources such as a venue, a human network, an administrative back up and financial support enabled the creation of three customised puppet projects and a production.
An humble possible, originally an utopia consisting in creating a show collectively, with no money, relying on the people instead of financial means, that is how the project Dédoublez moi began.
Not only was it a live art show, a unique experience on stage, but also a visual arts project, a human adventure involving about 40 people, most of whom were volunteers except for the artistic team.

Dédoublez-moi, dédoublez moi, des doubles et moi an incantation, a magic formula that opens the door to a mysterious cabaret combining dance, circus and puppetry. As a starting point, the three artists explore in a poetical manner the alter ego figure from twinship to insanity, thus exposing themselves to meeting their own paper double, life sized puppets bearing uncanny ressemblance to them…
Accompanied by a clown and a musician, the three women disappear and come together again, mixing up and recognising each other in a masked and circus performance. Who’s who? Who are we-me? How to find unity in the multiplicity of a personality’s desires?
A show consisting in a series of “tableaux vivants” to reveal the inner images of self metaphors. Artistic creation is seen as an intimate act. A path of life, a path from oneself to others, from body to soul, from the intimate sphere to the stage, from sensitivity to poetry, from darkness to light.
Using puppetry as an area of research and experimentation, as a personal print to reveal what is not visible however present. The mark of a fragile humanity that can be told beyond words, beyond flesh. 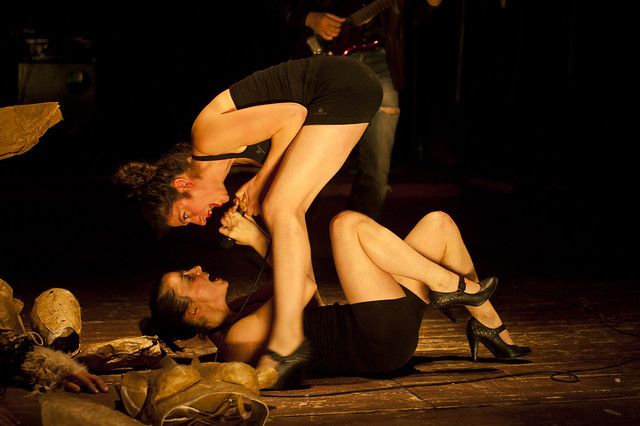 A visual arts project is at the heart of the conception of the show:
The project began with the exploration of the metaphorical figure of the alter ego by focusing on the production of three life sized puppets, paper doubles of the three artistsNanda Suc, Céline Valette and Chloé Derrouaz.
After making a full mould of their body, the artists participated in the creation of their alter ego puppets thus developing a relationship, a story and a growing desire to perform on stage with these objects.
That desire brought about a series of technical constraints specific to each puppet which then occupied a central part in the writing process. 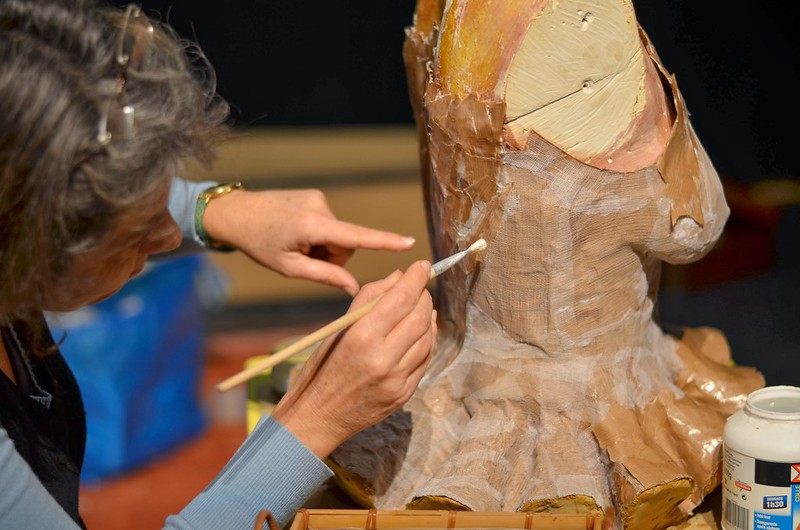 The relationship the women built with their puppets and between the four of them who lived the same experience of duplication led to experimenting the allegorical figure of the alter ego during research periods. The show is a construction made of various encounters.A cabaret atmosphere. Writing collectively seemed obvious once on stage.

According to the team’s wish to be accompanied by live music, Stéphane Dassieu was asked to compose and play the music of the show with the complicity of Nanda Suc and the expert and thoughtful ear of Haim Isaacs.

In order to carry out this huge project corresponding to approximately 400 hours of work per puppet, the process of fabrication took the shape of a performance.
The production of the show required four months and hundreds of hours of work at the workshop of the théâtre des Tarabates.
This could not have been possible without the implication of about forty volunteers who gave their time to make this incredible project come true.