Sur le chemin de la route is a book based on the trip to South America but it is also a circus shows, a collective production.

The title evokes life and its continuous transformation, paths that lead to other roads and further discoveries. The themes revolve around travel, life, the passing of time and the propulsion (almost mystical) that keeps pushing us forward. The stage settings of Sur le chemin de la route always combine the circus arts, photography, text and music.

When settling somewhere with their Big Top, Sébastien and Emilie invite professional artists as well as inhabitants of the area that have an experience in the performing arts and would be interested in participating in the production of a show.
A group consists of approximately 15 people.
The artists have ten days to create a show in situ. A cooking team is organised to create the flavours related to the countries that are evoked in the show during which the spectators are invited to share and taste the dishes thus becoming an integral part of the performance.
We can resume it a sort of cabaret travel diary (with photographs, text, circus, music and cooking).
Sur le chemin de la route invites the spectators to taste life through all their senses and entire body, with their head, their feet, their heart.
he passage of time and the stages of life permeate the landscapes that we see dancing on the stage.

if you want to watch a longer video, it's here ! 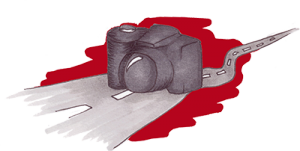